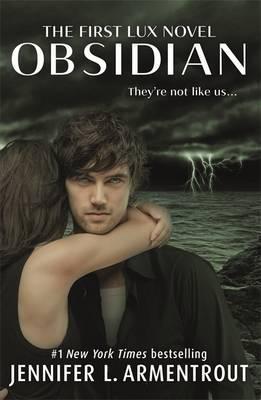 arting over sucks.
When we moved to West Virginia right before my senior year, I’d pretty much resigned myself to thick accents, dodgy internet access, and a whole lot of boring…. until I spotted my hot neighbor, with his looming height and eerie green eyes. Things were looking up.
And then he opened his mouth.
Daemon is infuriating. Arrogant. Stab-worthy. We do not get along. At all. But when a stranger attacks me and Daemon literally freezes time with a wave of his hand, well, something…unexpected happens.
The hot alien living next door marks me.
You heard me. Alien. Turns out Daemon and his sister have a galaxy of enemies wanting to steal their abilities, and Daemon’s touch has me lit up like the Vegas Strip. The only way I’m getting out of this alive is by sticking close to Daemon until my alien mojo fades.
If I don’t kill him first, that is

Obsidian, the first installment of the Lux Series has now made it to my list of top 10 books. Wow. That’s all I can really say – Mind. Totally. Blown. This was such a great, quick read! It’s pages disappeared within almost one sitting and I loved every moment of it. Obsidian reminded me of a few other books like Twilight and Need with the new-girl-new-town-paranormal-love trope it had going on. Now I will never get tired of books set in a new small town with a paranormal love interest. Seriously, I will read that trope to death but Obsidian was, dare I say, better than any I’d read before. Obsidian is the paranormal romance book for people who hate paranormal romances and if you don’t believe me now just wait till the end of this review.

In need of a fresh start after her dad’s death Katy and her mum escape Florida and move to West Virginia to a one stop light town. Katy assumes her life will be boring but that was before she met her arrogant, infuriating neighbor Daemon and his sweet, bubbly sister Dee. Daemon, with his eeriy green eyes is sexy and dangerous and Katy knows there is something strange about him but when Daemon actually stops time with a mere wave of his hand Katy discovers just how strange he is. Daemon and his sister are Luxen or, aliens with a galaxy of enemies after their abilities and now Katy bares their trace. Now with a target over her head, Katy must stay close to Daemon or risk being hunted by the arum who will use her to get to him. That is, if she doesn’t kill Daemon herself first.

One of the best things about Obsidian was it’s amazing cast of characters. Katy, our main protagonist was relateable and I loved her. Why? Because not only was she feisty and witty but she was actually one of us. She was a book blogger and straight away I understood her character and passion for books –  I think we all can. She was an avid reader but there were also moments included when she’d get all excited over a new delivery of books in the mail or stalk her blog comments and we’ve all done that. I mean am I right or am I right? These little details just made her seem so real and I LOVED her shirt – My Blog Is Better Than Your Vlog – I mean I’ve gotta get me one of those! Katy was a fully fleshed out character with hobbies and interests – she wasn’t just obsessed over Daemon which is why she is no Bella Swan (and she was so not having any of his crap). Katy saw that Daemon wasn’t good for her. Was she attracted to him? Hell yes! But she pushed him away, sanding up to him and refusing to be manipulated and used. And, can I also just take this moment to say that I totally appreciated her reaction to discovering Daemon was an alien. Thank you! Finally a character who actually has a realistic reaction to finding out the paranormal exist. She had me laughing out loud and her voice was additionally relateable. I loved living inside her head for the duration of the novel – I could see us being best friends if she were real.

On the other side of Katy we have Daemon. Ah…. Daemon….. This is why this book was so good! Seriously, you want to know why you should give Obsidian a chance? I’ll give you two words: Daemon Black. Seriously. I think I swooned and my cheeks flushed every time he opened his lips… sighs… Anyway, Daemon is arrogant and infuriating but we all knew it was a mask. The real Daemon, the one who flooded through the facade from time to time, was tender and sweet, even, dare I say it? Kind. Daemon is extremely protective and possessive of his sister, Dee and will do anything to keep his fellow Luxen safe. Behind the sarcastic exterior that looks as though it were chiseled by the gods is a strong value placed on family. Not just snarky and sometimes a complete ass, Daemon is the guy who would tear the world apart for those he love.

But what makes him better than Edward Cullen and basically every other paranormal, dangerous love interest ever was the tension he brought. My. God. The sexual tension and chemistry between the two was through the roof. You could practically feel the electricity through the air. It kept me turning the pages, it kept me guessing and it left me desperately wanting the two to admit their feelings so damn bad. Daemon was a complete ass to Katy (reasons for this revealed in later books as well as Oblivion and Shadows) and Katy in turn, pushed him. He kept switching from hot to cold and we, like Katy were desperate to figure him out. Their constant bickering was what makes Obsidian different. Here we have two characters, both strong in their own right who push each other. It was so refreshing!

Now, its no secret that Obsidian isn’t an overly sophisticated read but it is amazingly entertaining. Jennifer’s writing just flows well – it’s layered with wit, intrigue, snark, humor and as mentioned before an abundance of sexual tension. Obsidian is a refreshing twist on it’s genre and its just such an enjoyable experience. It’s books like these that remind us of why we read. The plot is fast-paced and never fails to keep your attention. It doesn’t drag in the middle which is a common factor in some paranormal romances, it’s just a non-stop rollar coaster ride. As mentioned previously, Katy’s voice is strong and her inner monologue is filled with other YA references (I totally appreciated her asking Daemon if he sparkled…), humor and a plethora of remarks. Katy’s lens is one I loved viewing her world through!

So hopefully I’ve convinced you to take a chance on Obsidian and if I haven’t well take the chance anyway – what have you got to lose? Obsidian is fun, refreshing and different, it’s everything you want in a quick read! This book just grabs hold of you and refuses to let go until it’s dramatic crescendo. I highly recommend Obsidian – five shinning stars for a great urban paranormal read.