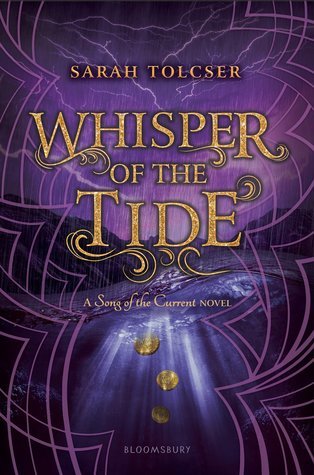 The second installment in the immersive series set along the waterways of a fantasy world, perfect for fans of Sabaa Tahir.

Caro has settled into a routine: Wake, eat breakfast, try to figure out who is going attempt to assassinate Markos today. The currents aren’t exactly calm. Markos is in constant danger, and his claim to the Akhaian throne is largely unsupported. Without military strength he doesn’t have a chance. Relief appears on the horizon when a powerful Archon wants to side with Markos in his fight for the throne. But in exchange for an army, Markos must marry the Archon’s daughter. They must decide which is more important: their love for each other or the fate of Akhaia. And Caro will have to decide if her destiny is to sail with the tide, or chart her own course.

“There’s no law on the Pirate Isle.”‘

Oh my goodness – I utterly devoured this one!

In Sarah Tolcser’s debut novel Song of the Current we were swept away into the murky world of the Riverlands. It was a world where Wherries navigated the dark jungles full of smugglers, pirates and the gods who lie beneath. (See my review here)

Whisper of the Tide took what we thought we knew about the Riverlands and its surrounding kingdoms but completely turned the tables and ups the stakes – in the best possible way. Whisper of the Tide brings plenty of pirate action with treasure maps, assassins, ships (both literally and romantic), schemes within schemes and major plot twists. There is danger and the overall feeling of dread sewn into each page as Caro is catapulted into another adventure.

But this time we are on the high seas and at the mercy of the Sea God.

Talk about serious Pirates of the Caribbean vibes! I can almost hear the theme playing in the distance…

Whisper of the Tide basically picks up right where Song of the Current left off. We are thrust straight back into the action with Caro and Markos campaigning for the Emparch’s throne and gathering allies in the port city of Valonikos. Things are not going well with the nobles unwilling to choose a side and the common folk calling Markos “the pretender”. That is, until the Archon agrees to give Markos his forces if he agrees to an arranged marriage with his daughter, Agnes which sets the whole plot in motion. Just like in Song of the Current nothing is what it seems, old foes become allies and dangerous new adversaries arise leaving Caro undecided about just who she can trust.

One of the things I loved most about Song of the Current was its fantastic world building. As much as I missed the absence of the murky waterways in Whisper of the Tide I was 100% here for the expansion of Sarah’s world and the new pirate aesthetic. There is such a vast contrast between novels with Song of the Current being all dark jungles and muddy, spider infested waters. Whisper of the Tide is an entirely new pallet – here we get new horizons with abandoned islands, ship wreck shoals and dirty, crime infested pirate isles (Tortuga anyone?). Despite the new, brighter pallet there is still plenty of darkness and danger with an action packed plot that never loses its momentum.

At the heart of the story is our girl Caroline Oresteia or, as the papers have named her the “rose of the coast”. Whisper of the Tide’s focus shifts a little as Sarah works to flesh out her character more, maturing Caro from the feisty little wherry girl we were first introduced to. After the events of Song of the Current Caro finds herself landlocked and she’s got some major issues to overcome. Not only is she feeling lost after discovering that she does not, in fact belong to the River God but she needs to discover just who this new Caro really is. No longer wrapped in the safety net of Cormorant’s decks she is facing her destiny alone and wondering if a life on land with Markos could ever make her happy. I loved watching as Caro evolved during her misadventures. Caro is such a strong heroine – even when working through her insecurities.

One twist I was not expecting was Sarah’s decision to put the romance on the back burner. Don’t worry we’ve still got plenty of swoon inducing moments between my babies Caro and Markos but Sarah really lets the pirate shenanigans take the helm (see what I did there?).  Now before you all panic, let me stress that Whisper of the Tide by no means presents us with a love triangle. But, what we do get is a new dynamic which throws a bite of a wrench in things as our resident scallywag and cut throat Diric Melanos comes into play. Can I just say I seriously loved how his character developed? The banter that followed his surprise return was just the definition of epic leaving me in stitches every dang time. I’ve heard a lot of my fellow bloggers refer to Melanos as the Jack Sparrow of the series and I totally agree.

If I had one complaint about Whisper of the Tide it would be that we didn’t get to see the original crew of the Cormorant, Nick Oresteia and Fee. I, along with Caro for that matter, really missed these lovable characters! I know Fee was such a minor character but I really loved her – she was a Frogman (half frog half human) and one of few words but I was fascinated by her species and wanted to know more about her. I missed having her as Caro’s side kick.

My final complaint (not that this one is really a complaint more just me whining) is that Whisper of the Tide was the conclusion to what was such a fun duology. I want so much more from these characters and Sarah’s immersive world! I loved how Caro and Markos’s story was wrapped up nice and neatly but am I the only one who noticed the threads of possibility for a few other beloved characters? I would love to see an expansion of the world with maybe a spin-off featuring Kente or Melanos! Please? Who do I need to see in order to make this happen?

That being said I had such a great time with this duology and highly recommend it. This is a dangerous world that keeps you on the edge of your seat with its fast pacing and lyrical language. I was 100% engrossed at all times and this series will forever sit smack bang in the middle of my favorites shelf. I can’t wait to see what Sarah Tolcser writes next – no doubt it’s going to be epic!

2 thoughts on “Review: Whisper of the Tide by Sarah Tolcser”