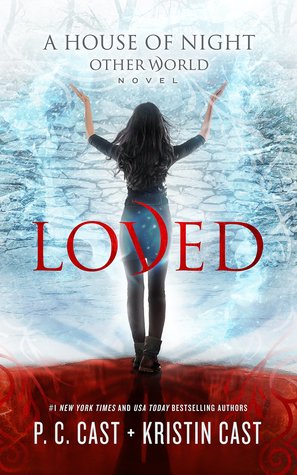 It’s Zoey’s eighteenth birthmas and the Nerd Herd has been scattered across the country busily adulting for almost a year when Stark calls them back to Tulsa to surprise Z. But all is not well in T-town. Strange, dark signs are appearing—could it be possible Neferet is stirring? Not willing to chance disaster striking again, Zoey calls on her newly reunited friends to circle with her and add a layer of protection over Neferet’s grotto jail. Easy-peasy, right?

Wrong. Nothing at the House of Night is ever as it seems.

With rabid red vampyres closing in, Zoey and the Nerd Herd must come together again and battle evil. But a year is a long time. Have these old friends grown too far apart? When the world fractures and allies become enemies, will darkness devour friendships or will light save those she’s loved?

I’m a little on the fence with Loved, the newest adventure in P.C. Cast and Kristin Cast’s House of Night Series. While the idea of Loved seemed like it would be a whole lot of fun I didn’t love the actual delivery of the plot as much as I wanted to.

Loved was released in celebration of the original House of Night’s tenth anniversary. – Can we honestly just take a moment to process that thought??? Marked is ten freaking years old??? Gez, I must be getting old too… I’m not even going to talk about that. –  Now I’m going to just put it out there in the open and say that I love anniversary material as much as the next girl. That being said I wasn’t sure we really needed a continuation of an already twelve book series. I would have been happy with a special edition of Marked with a novella included instead.

First things first, what I was really happy about was the fact that both old and new fans alike could fully enjoy Loved. P.C. and Kristin very wisely included a foreword with a nifty little summary of the original series and it’s characters to serve as both a refresher and an introduction. BUT, obviously it does spoil literally everything so if you are interested in House of Night I would recommend starting with Marked. (My spoiler free review for the whole series can be found here if you need some motivation).

Beware – minor spoilers below for the original series end so read at your own risk and remember that I did warn you!

Loved is set one year after the events of Redeemed. When we left the beloved “nerd herd” they had established themselves as the first ever North American High Council with our girl Z as the High Priestess of Tulsa’s House of Night. Not much has changed since although Neferet may or may not be stiring and causing all sorts of chaos and drama but hey, what else is new? Stark has gathered everyone back home for the holidays in preparation for Zoey’s 18th birthday or “birthmas” as she calls it. But it wouldn’t be a House of Night book if everything went according to plan…

In theory this all sounds like another epic adventure for our beloved herd of nerd but I felt that the drama that unfolded took away from the fact that they were supposed to be celebrating. I really wanted a heartwarming christmassy story like Sarah J. Maas’s A Court of Frost and Starlight. I wanted answers to some of the unanswered questions especially because I believe that the original series wrapped up a little too nicely. I wanted to see the inner workings and politics of the new High Council and their relationship with the original Vampyre High Council. Then there was the new plot development to throw more drama into the mix. For some reason I just didn’t fully connect with the whole “otherworld” thing. It was confusing as heck and was it just me or did it feel underdeveloped and entirely out of place? I was seriously left with more questions than answers and a whole lot-a confusion.

Like I said, I would have been just as happy with a shiny new edition of Marked with a short story about the gang celebrating Z’s Birthmas and a look at the new politics.

What saved Loved for me though was the better sense of closure. Like I touched on before, (and without getting into too many spoilers) I wasn’t 100% satisfied with the conclusion to Redeemed. After so many years, twelve books and four novellas I think the problems were solved to fast and suddenly we had this new world order introduced in the final chapter. It all felt a little too convenient. Plus some of the characters weren’t left in the best of spots. I did enjoy the character arch of Aphrodite in Loved and how she was finally able to work through her issues but why the hell was this not included in Redeemed?!? Grrrrr! At least she finally found the self-love and healing she deserved. 🙂

But, at the same time there were a couple of elements I didn’t really agree on. Other HoN fans might come at me with pitch forks for saying this but I was not having the resurrection of one character in particular. Nope. Nope. NOPE. That was way, way too convenient! Why P.C. did you even kill the character off in the first place if only to magically bring them back?!?! ksjfdbvkjwerwbglwekfnhsvdfkhsvdfk

I don’t want to spoil him but there was a new(ish) character who makes an appearance in Loved who I absolutely adored. I believe this character had been mentioned in the original books (although I’m not certain we were ever given a name?) but it was so good to see him evolve as a fully fleshed out character. I actually liked his dynamic with the rest of the nerd herd, especially with Zoey and Grandma Redbird and can’t wait to see how he finds his own path in Lost.

All in all, Loved was a light, fun read and it felt like coming home to be back inside these beloved characters heads. Is loved really necessary though? Well I guess that’s up to you to decide. I don’t think you have to read Loved once you finish Redeemed but I was nice to see both Aphrodite and Damien get some closure. It was also fun to check in with some of my OTPs and Ships but, don’t go in expecting a whole lot of nerd herd bonding and celebrating like I did. This is not a book with little plot. Here there be trouble brewing with plenty of classic Z stress, snot crying and drama. The shit well and truly hits the metaphorical fan in this one – classic House of Night with a whole lot of crazy and more than a little bad weather.