If you look the right way, you can see that the whole world is a garden. 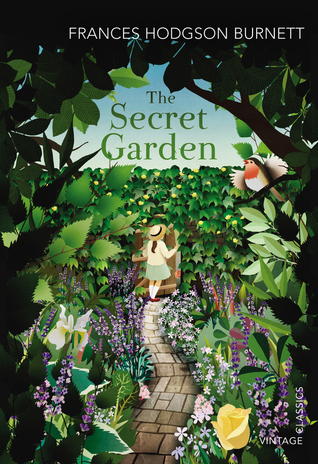 able-looking child ever seen. It is true, too. Mary is pale, spoilt and quite contrary. But she is also horribly lonely. Then one day she hears about a garden in the grounds of the Manor that has been kept locked and hidden for years. And when a friendly robin helps Mary find the key, she discovers the most magical place anyone could imagine…

The Secret Garden, a real gem of a book, was everything that I needed when I picked it up for yet another re-read. I meandered down memory lane feeling all the nostalgia as I followed Mary into her secret garden where hope and friendship blossom and even mends a broken family. This book is what got me through my reading slump, rekindled my love for vintage classics and left me feeling lighter.

I first read Frances Hodgson Burnett’s timeless story as a child – probably around the time I took my first tumble down the rabbit hole with Alice. Since that initial step into the garden, Mary’s story is one I’ve read and re-read whenever I’ve been a little blue or lonely. It’s a magical coming-of-age story which still holds that very same enchantment going in as an adult. It’s a classic that’s basically required reading and with that, let’s get into why I adore this book so much…

The Secret Garden is set along the atmospheric wuthering moors of the English Countryside where our protagonist, the newly orphaned Mary Lennox is sent to live. Mary is unaccustomed to life outside of India and is unimpressed by the dreary life at Misselthwaite Manor. The manor is as bleak as the land on which it stands, with over a hundred rooms all of which are shut up and locked. It’s because she is so desperately lonely that Mary takes to exploring the grounds where she discovers a secret that will change her and those around her. The manor itself, this dark, cold place very much mirrors the state of those who inhabit it. A sorrowful spell has been cast upon the house. Both the Master, (Mary’s uncle) a disfigured, hunched man who mourns his wife and his no-nonsense house keeper, Mrs Medlock, are cold-hearted people, leaving no room for fun or enchantment.

Mary Lennox isn’t your typical protagonist. Yes, she is an orphaned heroine but she is no Anne Shirly. When we are first introduced to her we met an unloved, violent, disagreeable child who is described as plain and “contrary”. Much like the secret garden itself, Mary is a forgotten girl only in need of nurturing. One of the greatest joys of reading her story is watching how, like her garden she blossoms from the sickly, lonely girl into one who learns to love and smile. Mary is like most spoilt children. She is merely an unfortunate product of her upbringing. Her mother, a selfish, self absorbed woman had no time for a daughter she never wanted and so Mary was neglected and raised by the servants. Much like a garden, when left alone and not cared for all living things wither. Mary and the garden embody the overall theme of the novel which is rejuvenation. We don’t hate her for her faults. Mary’s only human and in need of a mother and tender loving care.

Also, time for a quick side note: Can we please just talk about Mary and Dickon for a moment? I know that The Secret Garden is ultimately a children’s book with the focus being solely on friendship and not romance but still… Was I the only one who shipped Mary and Dickon? I just can’t help it – they are so cute together! Not to mention the way she romanticizes him and called him an “angel”.  I like to think that as they grew up playing about the moorlands and gardens they evidently feel in love. 💗💗💗

Another important character in the novel is the secret garden itself. Yes, you read that right. The secret garden is a very important aspect of Mary’s Story. After all, the novel isn’t called Mary or even Mary’s Secret Garden (like the fashion of the time; Jane Erye, Heidi, Anne of Green Gables). It’s called The Secret Garden because the garden is the catalyst for the change in the novel. Not only does the garden symbolize the recurring themes of the novel, rejuvenation and neglect but it is the garden that heals all of the characters who visit it. Mary, Collin, Mr Craven, it is the garden that allows the broken family to come together and heal. The garden, a sort of Eden belonged to Mistress Craven who perished in childbirth, the catalyst for Mr Craven’s transformation. After her death, ten years before Mary’s story begins, Mr Craven shut the garden up leaving it to wilter and fall into disrepair. There is a clear parallel between the Secret Garden of Mary’s world and the Garden of Eden in the Bible. It’s a magical paradise of innocence and healing where hope breaths.

As far as the classics go, The Secret Garden is one of the more underrated classics. It’s a charming tale of friendship, family, miracles, magic and healing, ahead of it’s time. It holds the same magic reading as an adult, in fact, I think you really appreciate the overall message more. Though it is marked as a children’s classic it really has mature themes and can be enjoyed completely at all ages. If you haven’t already done so you really should give The Secret Garden a read because it really is one of my all time favorite books.

3 thoughts on “Review: The Secret Garden by Frances Hodgson Burnett”