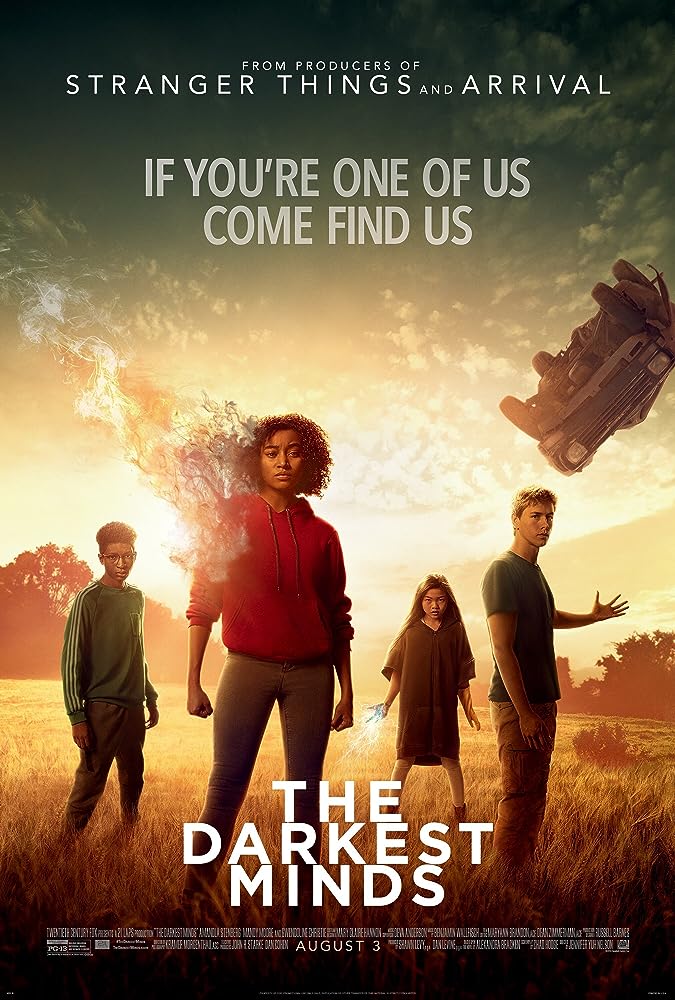 So I decided to do something a little different today…

Reading has always been a huge part of my life but I am also a movie buff. I love a good flick, whether it be an action-packed thriller, a sweet romantic comedy or a drama. I am also a huge fan of book to film adaptions – when done right that is. There is nothing like watching your favorite stories and characters come to life on the big screen!

With that in mind, I’ve just seen the Darkest Minds, the latest in a string of YA book to film adaptions and I loved it. This wasn’t a perfect movie, (really is there such a thing?) but I think it’s one of the better book to film adaptions I’ve seen with the exception of Love, Simon. The Darkest Minds is a solid adaption that respects Alexandra Bracken’s book all while putting it’s own spin on the much loved characters. Those who’ve read the book will appreciate the film as a faithful, worthy adaption and those who haven’t will be ensnared by Ruby’s story and reach for the series. For those of you who haven’t yet read these amazing novels, welcome to the fandom! So let’s get into the highlights of the film overall and how it compares to the book…

Side note: Obviously I’m going to be discussing the movie so there will be some minor spoilers in terms of Easter Eggs, what I loved and what I didn’t but if you read the book then you’ll know all this anyway. I won’t be spoiling the major plot points or the ending though. Just so your warned – I’ve got your back 😉

As far as the overall plot goes it sticks pretty darn close to the original novel by Alexandra Bracken. Basically, your initial premise is that a mysterious disease has manifested in America’s children and the government is trying to find a cure (” “). Most of the children have died and those who remain have developed abnormal abilities that render them “dangerous”. Our protagonist Ruby is one of the dangerous ones and has been placed in one of the many “rehabilitation” camps around the country but they won’t be feared or repressed forever…

The film, like the book has a very important message about finding your voice and the power of youths which is very much relevant in our currant world. I think the overall tone of the film was very inspiring. These are not weak willed, one dimensional characters but strong heroines/heroes that people can look up to. The film focuses on the power of family and honestly – it just brings all the feels guys! There were so many moments that I just loved because it took me straight back to the book. The dynamic and chemistry between Ruby, Liam, Chubs and Zu was so thick, you could have cut it with a knife. The actors do a great job of pulling the audience into their tightly knit group and making you feel apart of something.

Also I know a couple of my friends were disappointed with the added eye color thing. Look I didn’t hate this. Yes, in the books their eyes didn’t glow with the color their power represented but I think this was a good move in helping those who hadn’t read the book keep track of what character had what ability. 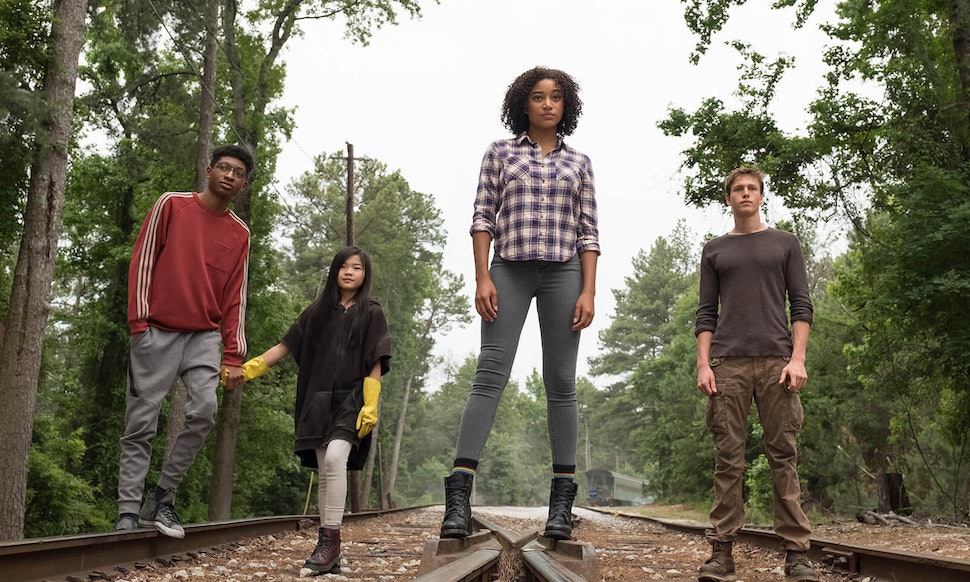 I just have to say that I though the casting choices for the film were really good. As I said before, the chemistry between these kids is just perfect in keeping with the book. In the various behind the scenes footage and interviews it was plain to see that this cast got on really well and I think that really translated onto the screen evoking that overall sense of family. Chubs had me laughing in stitches and don’t even get me started on Zu. The actress who played Zu,  Miya Cech was just perfect! Considering how young Miya is she did such a good job which tackling the role of Zu. Zu doesn’t actually talk (the reason is revealed in later books) so her character has to communicate purely through expression and gestures and Miya did such a great job. I actually wished she and Chubs had more screen time because I felt that they really embodied their characters. I did appreciate how the writers left the “It’s a minivan, not a Viking” scene in there though. The whole theater laughed at that!

Then we have our protagonist Ruby and our love interest Liam… Now this is where some of my mixed feelings come into play. Again I loved the casting of Amandla Stenberg as Ruby and Harris Dickinson (who at first I was skeptical off but have come to love) as Liam. I think Ruby and Liam had great chemistry and I truly adore their romance but I wish they had a lot more screen time. I think the film really focused on the action and plot – which was great – but I feel like for those who hadn’t read the book that deeper sense of love wasn’t fully there. The romance needed to be a little more developed, maybe the writers thought it would slow down the action? I don’t know, but I wanted more of Ruby and Liam just talking and getting to know each other. I did love the “peace offering” scene and the Harry Potter reference though #swoon! But where were some of his cute romantic lines? I needed the “did you know…you make me so happy that sometimes I actually forget to breath? I’ll be looking at you, and my chest will get so tight…and it’s like, the only thought in my head is how much I want to reach over and kiss you” scene! But, can we please just take a moment to appreciate just how much of a great guy Liam actually is? Where can I get me a Liam?

There was one aspect about Liam I was a little disappointed in. I seriously missed Liam’s southern accent! Where was that swoon-inducing and totally cute drawl??? And his quotes!!! I think that my biggest disappointment in the whole movie was the fact that Liam’s infamous quote “Let’s carpe the hell out of this diem” wasn’t included. I feel slightly cheated 😦 😦 😦 . And  “Hi, darlin’, missed you something fierce.”… These were some of my favorite quotes of the book and I wanted them delivered on the big screen!  BUT, the movie made up for this by delivering all the feels with “cause, frankly, the way I see it, you and me? Inevitable” – I actually cried… big, sobbing tears…

Also Mandy Moore as Cate??? YES! Mandy Moore really brought that charismatic, caring side of the character to the screen. She was mysterious which I liked because you never really know if you can trust her or not.

While the film adaption had to change a few minor details in order to adapt better to the screen, the loyal fans of the series won’t be disappointed. That being said, the film makers do a great job of adding in little nods to the source material and plenty of Easter Eggs for the fans. I really appreciated the reference to “Black Betty”. Even though it didn’t really further the plot or add to the action Betty played a huge role in the book, becoming a home to these kids who didn’t have one. Yes, the significance was probably lost on most of the audience but us book nerds got the nod and felt all the feels associated with it. Also, if you have read the book be sure to look out for the nod to Watership Down. Our girl Alex Bracken even makes a cameo! Keep your eyes peeled towards the end and the brief scene in the hospital… 😉

The Ending: (Spoiler Free -just a lot of feels-) 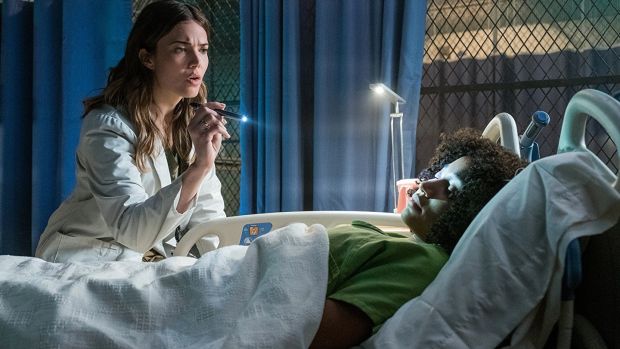 All of you who have read the book know what I’m talking about when I say: asjhvfdichsgichegihuebgifhbiuehl!

I thought I was prepared for that twist but nope – NOPE! The actors really brought all the feels to the screen and it translated perfectly. I cried big ugly tears and they didn’t stop until the end of the credits. I must have looked like a hot mess. Also the soundtrack choice for THAT scene… Oh gosh that really destroyed my soul. Find Me feat. Birdy by Sigma? Such a good move on the writer’s/director’s/editor’s part. I think that song really added an extra layer to the emotion of the scene.

Overall, The Darkest Minds is such a solid adaption that puts a new spin on this much loved series. All the little moments you love from the book are there (Black Betty, the Socks, the Dress, Watership Down…) which is a perfect gift for the loyal fans. The casting was spot on and I liked the direction and tone the movie took. I was worried that the producers would dumb the film down and shy away from those darker themes but they didn’t. The Darkest Minds is full of hope and the love between the family you make but there are still those moments that really hit home and bring the feels. If you loved the book like I did you won’t be disappointed so be sure to check this one out.

Have you seen The Darkest Minds? What are your thoughts? I’d love to discuss this movie with you because I am in love.