Queen or traitor? Only she can decide. 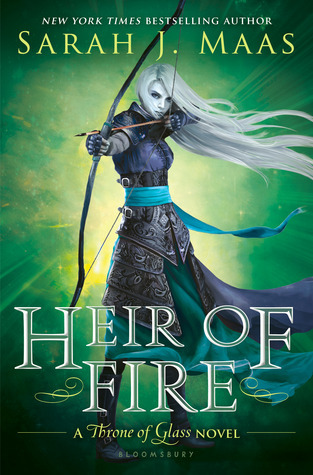 Consumed by guilt and rage, Celaena can’t bring herself to spill blood for the King of Adarlan. She must fight back…

The Immortal Queen will help her destroy the king – for a price. But as Celaena battles with her darkest memories and her heart breaks for a love that could never last, can she fulfill the bargain and head the almighty court of Terrasen? And who will stand with her?

Meanwhile, brutal and monstrous forces are gathering on the horizon, intent on enslaving her world. To defeat them, Celaena must find the strength to not only fight her inner demons but to battle the evil that is about to be unleashed.

If Throne of Glass is one my favorite series, Heir of Fire is hands down, one my favorite books. Heir of Fire utterly crushed my soul with it’s slow burn journey and sheer sweeping epicness. Seriously – beware the ever present book hangover because it’s coming. If Crown of Midnight is the turning point, Heir of Fire is the game changer. During the first installments the rising action and plot are mainly confined to the walls of the glass castle. Heir of Fire changes things up.

Expanding upon the general scope of the series, Heir of Fire’s plot is split between three vastly different narratives. Celaena’s narrative takes us to the Eastern Continent; Wendlyn and her quest to learn more about the Wyrdkeys. You have Chaol, Dorrian and Aedion’s rising rebellion back in Adarlan’s capital, Rifthold. The final plot thread we have comes in the form of the Ironteeth Witch Clans and their train-your-dragon-like quest of breeding Wyverns in the Ferian Gap. Remember in Crown of Midnight when it was revealed that the King was breeding some kind of Evil with a capital E in the White Fang Mountains? Remember when Kaltain complained of flapping wings and headaches? Foreshadowing!  And, if that isn’t enough to convince you; there are seriously badass characters introduced (and new ships! #Rowaelin), new adversaries declare themselves and we bare witness to a truly emotional journey of self-acceptance and healing.

Beware: Spoilers for the first two installments below. You have been warned.

The first thing you should know going into Heir of Fire is that this is not a fluffy read. If you thought A Court of Mist and Fury was emotional… Well, let’s just say that you’d better strap in because you are in for a ton soul crushing agony. I wept, I laughed and my heart cleaved in two for Celaena. This is definitely her turning point in her character arch. We witness our hero at her absolute lowest as she desperately seeks to rebuild herself from the broken girl Nehemiah and Chaol left behind. She can no longer live with the weight of the person she has become and she must forgive herself for her past and forge a new future. Yes, it’s hard watching Celaena at rock bottom but, she becomes more human. Her journey to become Aelin of the Wildfire is inspiring and she shows us that being strong doesn’t mean you’re incapable of falling – but you have to get up. Celaena utterly slayed in this installment and I love her ever more for all her pain and flaws.

Celaena isn’t alone on her journey though. Enter brooding warrior and resident fae prince; Rowan Whitethorn. #Stickaforkinmeimdone. For the record, I was always #teamchaol but from Nehemia’s death in Crown of Midnight I knew that ship was sunk and I was 100% here for it. From the moment Rowan, in all his brooding, chiseled glory prowled onto the scene in Heir of Fire I was shipping them. While there isn’t a romantic relationship in Heir of Fire their friendship is the actual definition of epicness. (yes, I’m aware that “epicness” isn’t actually a word but it’s my word). Rowan, who is a real piece of work by the way, is almost as broken as Celaena and what they both don’t realize is they’re exactly what the other needs. Together, they claw their way out of the abyss. What I truly love about their pairing was the fact that they understood each other and the utter lack of judgement. Chaol who?

Now before I discuss the other characters I have to talk about my favorite aspect of Heir of Fire and that was the world building. Hello expansion! Sarah is the almighty queen of crafting sweeping worlds but I just adored with how she wrote Wendlyn and Doranelle. After hearing about Queen Maeve’s Domain I was seriously looking forward to discovering her secrets and exploring their world and Sarah doesn’t disappoint. Doranelle is just as magical as you’d imagine it to be. Serious LoTR’s vibes here. But, besides Wendlyn Celaena’s quest to hone her magic and gain entrance to Doranelle brings her to my favorite place on the Eastern Continent; the last outpost of the human lands and the doorstep of the demi-fae – Mistward.

Basically Mistward is a fortress-like proving ground for the demi-fae who aren’t allowed entry to Doranelle because they are “half breeds”. Yes, they might be all kinds of unique but I loved the characters who inhabited Mistward.  I could read a whole series based on the demi-fae of Mistward. Plus, can we please just talk about how much I love Luca, Emrys and Malakai??? Luca is just so adorable and so kind to Celaena. Basically a certified cinnamon roll. And for those who say Sarah J. Maas doesn’t write diversity… Um, have you met Emrys and his husband Malakai??? Emrys works in the kitchens at Mistward but his true title is Story Keeper. I loved sitting around the hearth with the gang listening to the legends. Can Sarah please bring these guys back for Kingdom of Ash already??? Besides, the I’ll-make-a-man-out-of-you-montage-esque-plot and the cast of characters I also enjoyed Mistward’s atmosphere and the sensory feel. I was completely swept away; I could hear the hustle and bustle of the kitchens, I could smell the pine and camp smoke, I could feel the damp cold and taste the mountain air.

Back in Adarlan we have a whole ton of plot threads and answers sewn together. In Crown of Midnight we learnt more about the rebels and the other conquered countries of Erilea but in Heir of Fire we finally get to discover more about magic. Besides touching on the fall of magic ( Let’s just say that creepy-ass clock tower might actually be as sinister as it seems…*Wags eyebrows*), Sarah shows us just what happened in the initial days of magic disappearing and how it effected those with fae blood living in Erilea. Let’s just say it’s as brutal as you’d imagine. And also – how sneaky is Sarah? I mean really! The Frozen Wastes/ Deserted Peninsula theory was there all along (seriously go check out the map). As I mentioned before, we also learn about what the king is really breeding in the mountain camps in the form of Manon Blackbeak, heir to the Blackbeack witch clan, leader of the thirteen and resident badass. Initially I was skeptical about this added perspective. What relevance does a bunch of deadly witches have in regards to Celaena and Rowan’s quest? A lot of relevance okay, so pay attention.

After Crown of Midnight’s critical turning point, Heir of Fire expands the series, taking it to new heights (see what I did there) as the endgame begins to slowly reveal itself. All three narratives working together form the basis for the beginning of the end. All will become clear in due time; nothing is insignificant – everything will come back into play in Queen of Shadows and Empire of Storms. Yes, Heir of Fire is a deeply emotional, thought provoking read but it stands out in Sarah’s arsenal as one of her best character driven works. Just, trust me when I say that you’ll need at least a week to survive the ending and the sure to follow hangover. Good luck and happy reading.

Beware: Tower of Dawn spoilers in next paragraph. Read at you’re own risk. Don’t say I didn’t warn you.

Now the final thing I want to say (and I’ll keep it short because this is already a super long post) is that I picked up even more hints and clues on this third re-read. I know right! How could there possibly be anymore little nuggets left? Obviously I was paying very close attention to Aelin’s interactions with Maeve after Tower of Dawn and, well there was this… “she turned her violet, starry eyes to Celaena and gave her that spider’s smile.” page 501. hksdbkejbrfksljjncshdbvlaskjhdvcklasjdfb! Proof that the end-game was there all along!

11 thoughts on “Review: Heir of Fire by Sarah J. Maas”