True love is usually the most inconvenient kind 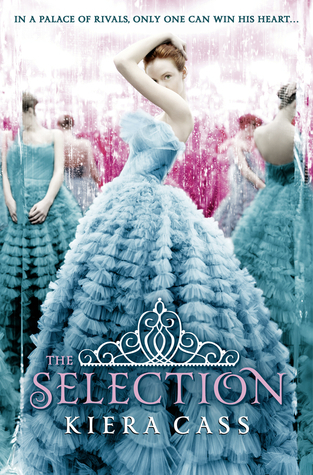 For thirty-five girls, the Selection is the chance of a lifetime. The opportunity to escape the
life laid out for them since birth. To be swept up in a world of glittering gowns and priceless jewels. To live in a palace and compete for the heart of gorgeous Prince Maxon.

But for America Singer, being Selected is a nightmare. It means turning her back on her secret love with Aspen, who is a caste below her. Leaving her home to enter a fierce competition for a crown she doesn’t want. Living in a palace that is constantly threatened by violent rebel attacks.

Then America meets Prince Maxon. Gradually, she starts to question all the plans she’s made for herself—and realizes that the life she’s always dreamed of may not compare to a future she never imagined.

At a time when vampires ruled all and the Hunger Games franchise was taking off, it seemed every man and their dog was reading The Selection. Hailed as “dystopian fairy tale meets the bachelor” I decided it was a firm no, avoiding the Selection like the plague. Heck, I basically waved as the band wagon passed me by.

Despite my hatred for all things reality TV, when a good friend recommended the Selection to me a few years ago I finally gave it a go. To my surprise, I actually had a lot of fun. Fast track forward a couple of years and here I am – re-reading the series again. Because why not?

I just want to start off by saying that, like me, don’t let the dystopian tag fool you into passing over this book. The Selection reads more like a modern fairy tale than a gritty dystopian novel – glass slippers and all. Okay, the plot is riddled with the classic dystopian tropes [see: the caste system) but The Selection isn’t just your typical failed rebellion.

The Selection finds it’s footing in the kingdom of Illéa which basically consists of post World War IIII America. In this modern post-war kingdom, it’s required that in order to pick a bride, the prince must hold a selection. For most, the selection is a chance of a lifetime – countless applications are sent out and only thirty-five are chosen.

For America Singer [yes, that is actually the protagonist’s name], the selection means leaving behind the simple life laid out for her and Aspen, the boy she loves. When her name is drawn, America is whisked away to a glittering world of gowns and tiaras, thrust into a cut throat fight for a crown she doesn’t want.

But, like any YA dystopian, unrest is growing in the kingdom. Against the increasing riots and rebel attacks, America begins to question her own heart as she finds herself falling for the dashing prince Maxon. Suddenly, the life she could never have imagined doesn’t seem all that bad.

I think the strongest aspect of the Selection is it’s cast of characters. As though they were reaped straight from the Bachelor itself, some you love, other’s you’ll outright loath. America, for what it’s worth, is a fully fleshed character with flaws. Boasting a fiery tempering and a rebellious streak that sometimes outweighs her more compassionate side. What I love about America, besides her stupid name and stubbornness, is her refusal to lose sight of her individuality. America is unapologetically herself, I admired that she was outspoken and mindful of her roots throughout the competition.

Then there’s prince Maxon. Okay, at first I wasn’t into him. Maxon is awkward and slightly cringe inducing – even the second time around. That being said, he’s a total sweetheart and I found his romantic outlook to be endearing. Maxon is humble and kind, 100% genuine despite his not-so-humble beginnings.

And of course, the Selection wouldn’t be YA unless it featured a love triangle because apparently that’s what the teens want these days. [Why?]. Aspen is America’s first love. A caste below America, Aspen is solely responsible for supporting his struggling family. Okay, I can’t begrudge his strong moral compass but man did he get on my last dang nerve. I mean, did we really need this unnecessary love triangle? Honestly, the Selection could have been a lot stronger without it. America had enough conflict [her doubt about identity and ruling a country], without shoving in the angst of a tired trope. Just saying.

At the end of the day, the Selection is a promising start to a glittering series. Okay, it’s not the most sophisticated or mature book on the market but it’s a certified guilty pleasure. Addictive and swoon-worthy, the Selection never fails to coax me out of a book hangover or slump.

14 thoughts on “Review: The Selection by Kiera Cass”