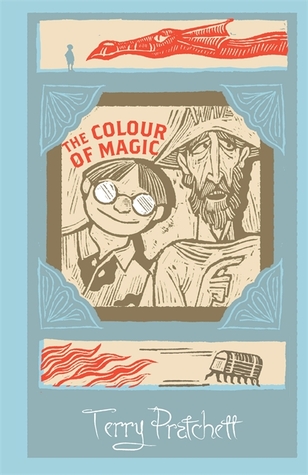 Travelling through space supported on the back of a giant turtle (sex unknown), the unique realm known as the Discworld is about to face an unimaginable threat: its first tourist.

On a world in a distant and second-hand set of dimensions, a gleeful, explosive, wickedly eccentric expedition sets out. There’s an avaricious but inept wizard, a naive tourist whose luggage moves on hundreds of dear little legs, dragons who only exist if you believe in them, and of course THE EDGE of the planet…

The Color of Magic is Terry Pratchett’s maiden voyage through the now-legendary land of Discworld. This is where it all begins – with the tourist Twoflower and his wizard guide, Rincewind.

The late Sir Terry Pratchett must be rolling in his grave because I have something to tell you. *Deep breath*. Okay, here it is – although I am obsessed with the Discworld series, I have never actually read the first installment, the one where it all began; The Colour of Magic.

I know what you must be thinking – What!?!

The Discworld Collectors Library editions with their minimalist covers and bright colours line my shelves, I have the Discworld map, the Complete Discworld Atlas and the Ankh-Morpork City Guide but I haven’t read the original Discworld book?

Lexie, I am confusion – explain!?!

See, the thing about the Discworld novels is that they aren’t so much a series than a collection of mini-series and stand-alone novels set in the same universe. Unlike Harry Potter, you will find that even if you start your Discworld journey at The Colour of Magic, the plot does not continue and stretch across the other forty one (yes – forty one) installments. Instead, the Discworld novels are comedic fantasy adventures that run almost parallel to each other, with common themes and motifs. Basically, they feel episodic. Characters pop in for cameos and cliches are parodied as Terry comments on issues and ideas very much relevant to our own society. You know, just minus the “wizzards”, witches and dragons. Basically, you can jump into the series with any book that strikes your fancy and still understand the abundance of wit and humor in it’s entirety.

I was first drawn to the world of the disc through the Phantom of the Opera. Yes, you did just read that correctly. Let me paint the picture: it’s 2018 and you have just watched the glory and mess of feels that is the 25th anniversary performance of the Phantom of the Opera at the Royal Albert Hall on dvd. You have now found yourself in a new fandom. You are obsessed. You buy the cast recording, you read Gaston  Leroux’s original gothic classic, you cry over the injustice to the source material that is RoseBlood and yet, you are desperate for more. Enter Terry Pratchett’s Maskerade. Welcome to the Discworld.

Since that first initial leap with Maskerade, (which I highly recommend just in case you were wondering), I found myself picking up installments at random. The thing is though, with the Discworld  the more you read the more you realize just how epic Terry Pratchett’s work (and his iconic characters) actually are. So, I decided to roll up my sleeves, grab my Discworld passport (literally available online at the Discworld Emporium) before starting (finally) at The Colour of Magic, reading the series in it’s chronological publication order.

Which brings us back to The Colour of Magic. [Got a little side tracked there].

Once you’ve read the later  installments, The Colour of Magic feels more like an extended prologue to the Discworld series. This is Terry’s maiden voyage across the disc in more ways than one and our introduction to some key characters and locations. Many people had said to me (even Sir Terry himself) that The Colour of Magic is, in fact, one of the more weaker installments. Reasoning includes; the fact that The Colour of Magic was written in 1983 and that it doesn’t really have a plot. It’s been dubbed mediocre, hard to follow and even boring. I have to say that this was so not the case with my reading experience! I adored The Colour of Magic, actually more than I thought I would considering I’m such a huge Granny Weatherwax and Discworld Witches fan. Rincewind, our “wizzard” who is quite possibly the worst wizard ever grew on me from the moment we met. Also, who doesn’t love an expedtion across a magical land??? Here misadventures and escapades abound as we follow our unlikely hero as he tries but mostly fails to guide the Disc’s first ever tourist; Twoflower.

Our story starts in the twin cities of Anhk and Morpork which combined make the noble capital of the Disc Anhk-Morpork. A colourful and some-what dangerous city, Anhk-Morpork is packed to it’s rafters with thieves, assassins, wastrels and scoundrels of pretty much all shapes and sizes. “A city where public executions, duels, fights, magical feuds and strange events regularly punctuated the daily round”. Not a place you would expect to find an all to trusting tourist with a magical trunk full of gold from the Agatean Empire on the Counterweight Continent. Basically, Twoflower has ripe for the plucking stamped across his naive forehead. After an assassination attempt on Twoflower at the Mended Drum (Anhk-Morpork’s most famous watering hole, home to many a bar fight, feud and duel) the pair barely escape the burning city with their lives. And so begin Twoflower and Rincewind’s iconic travels across the Disc. An adventure that brings them face to face with barbarians, unlikely heroes, unspeakable monsters, dragons that only exist in your imagination and of course the city of Krull which hangs over the Edge of the world. Chaos ensues.

The Colour of Magic is full of laugh out loud moments and plenty of world building. It’s unique format is easy to follow and at the best of times, extremely hard to put down. The thing about Terry Pratchett’s books is that he has a tendency to do away with chapters. Okay, at first thought this might seem weird but it gives The Colour of Magic a flow and it works with Terry’s witty, humorous writing. The Colour of Magic is also split into four equal parts or “books”. Each book almost feels like it’s own separate story. Think the Assassin’s Blade – each part has it’s own unique drama that ultimately pushes our heroes towards the climax in Krull, giving them skills and allies along the way. Some might say this makes the Colour of Magic feel choppy but I actually really enjoyed this format. it made putting the Colour of Magic down and going off to work a little bit easier!

So, do you need to start at the Colour of Magic to enjoy Terry Pratchett’s wit and satire like Discworld in it’s entirety? No, not at all. Although, having now traced across the Disc with Twoflower and Rincewind I can say that it is well worth the journey and required reading for any true Discworld fan. I laughed along as these two unlikely friends got themselves into countless scrapes, weaving their way through Terry Pratchett’s truly inspirational imagination. My advice? Ignore those who tell you to stay away from the first two Discworld books and savor the eccentric ride as tourists are mocked and your imagination takes flight – quite literally!

12 thoughts on “Review: The Colour of Magic by Terry Pratchett”