Time is a weapon – only she can use it. 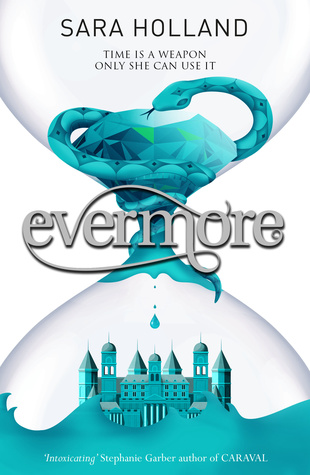 Jules Ember was raised hearing legends of the ancient magic of the wicked Alchemist and the good Sorceress. But she has just learned the truth: not only are the stories true, but she herself is the Alchemist, and Caro—a woman who single-handedly murdered the Queen and Jules’s first love, Roan, in cold blood—is the Sorceress.

The whole kingdom believes that Jules is responsible for the murders, and a hefty bounty has been placed on her head. And Caro is intent on destroying Jules, who stole her heart twelve lifetimes ago. Forced to flee Everless, Jules must delve into the stories she once believed to be legends but that she now recognizes are accounts of her own dangerous past. For it is only by piecing together the mysteries of her lives that Jules will be able to save the boy she’s falling in love with – and end the Sorceress forever.

In a different life Jules Ember stole the Sorceress’s heart. Now she will stop at nothing to get it back.

Evermore was not what I was expecting, and it wasn’t what I’d been hoping for either. I’m not sure what is it exactly that I wanted from Evermore but it just wasn’t… this? I really don’t know how I feel about this one guys. So 3 Stars? 4 stars? You know what – I think I’m going to sit myself in the middle here with 3.5 Stars because I honestly don’t know. Fair warning – this might not be my most coherent review.

So here’s the thing.

It’s no secret that Everless was one of my best books of 2018. A breath of fresh air in a sometimes trope riddled genre, Everless was sweeping and deliciously dark with it’s rather bleak tone and compelling magic system. In comparison, Evermore just didn’t have a whole lot of grip. Evermore felt trope-y and somewhat predicable, lacking those ruthless plot twists that had me gaping in Everless. Also, considering that Evermore is both a sequel and the finale to the duology, it suffered from that classic second book syndrome, lacking that punch that I so craved.

Evermore opens with a desperate Jules on the run and hiding in the village of Crofton. I have to say, the first hundred pages or so actually had me on the edge of my seat. This is where both Sara’s writing and her plotting is at it’s best. The pacing refuses to let up as we follow Jules (who now has a bounty of blood iron on her head for the murders of the Queen and Roan Gerling) as she reels from the aftermath of Caro’s betrayal and figures out her next move. Of course, Caro isn’t resting and we find ourselves barely a chapter in before literally all hell breaks lose. Dragged in chains to Shorehaven, Caro’s stronghold, Jules quickly finds herself in prison and, at the mercy of the sorceress.

But Jules is not alone.

Yes, my friends – you read that right. A certain someone, a dashing, devilishly handsome someone at that isn’t about to leave Jules without any allies. And so, the romance we’d all been lusting after in Everless finally steals the spotlight in Evermore. #thirst.

Romance and Liam Gerling aside, I think what really let Evermore down the most was the world building – or lack thereof. If you read my Everless review, you’d know that I was 100% here for the morbid concept of binding blood into iron and coin. Everless presented a world shrouded in mystery and blood, a world I’d rather hoped would be explored and expanded further in Evermore. I found that Sara abandoned her intriguing magic system and world building for a more trope filled, black and white fantasy plot. Even though we were literally on a quest for answers about the history of Sempera, the blood iron, the bleeders, the lore was all absent from the story and it just didn’t work for me. I mean – Evermore didn’t even feel like the same series. It felt just a little off. Talk about a missed opportunity.

The next kick in the gut for me was the whole past-lives-flash-back-thing. I mean, I was truly bored for the most part. And, if I’m being honest, half the time with the visions I had no idea where we were in regards to the time line or I was lost. What the actual hell was going on? There were too many plot holes in regards to the backstory and history of the Alchemist and the Sorceress and the plot just veered off coarse. It just felt a little all over the place? The sad thing is, I think that the visions could have been done so much better. I needed more of a climatic punch – a sense of foreshadowing and mystery. I mean, when was that pull, that need-to-know-more feeling that kept me up at all hours during Everless? Because frankly, Evermore didn’t have that same effect on me and I officially feel ripped off.

The nail in the coffin though? That ending. I mean – wft!?! Without giving it all away, there just wasn’t a good enough pay off. I mean, I was gearing up for a full blown confrontation of epic proportions and instead I was left with … that? Come on! After the knife in the back that was the Everless cliff hanger I needed something more. Something with that same rip-your-hair-out-and-scream punch to the gut. Seriously, who can I sell my soul to in order to make a re-write happen? Because I’m seriously considering it.

Basically, I think we can chalk Evermore up to rough plotting or a lack of planning. It just didn’t head in the direction I needed and I’m starting to realize that Everless should have been a stand alone. The lyrical writing and even the sheer presence of Liam Gerling weren’t enough to carry the mess that was the later half of the plot through to a solid 4 or 5 star read. For a conclusion it was too mediocre – consider me mildly annoyed and left with a churning disappointment after a year of anticipation.