Hey guys, it’s time to grab that passport because today we are setting off on an adventure – of the literary kind of course!

All righty, at this point you know I sound like a broken record when I say I’m all about the setting and world building. As much as I adore a good romantic subplot and an epic character arc there’s just something to be said about exploring new worlds and their lore. So, when I saw the Bookish Adventure Tag on Siobhan’s blog there was just no way that I was going to scroll past because this is such a unique idea for a tag. Who doesn’t love writing about their favorite worlds? So here we are!

Also, side note, today also marks my 3 year Anniversary with Reading By Starlight. [WHOO HOO!] I know – what?!? Can you believe that it’s been 3 years already? Because I sure as heck can’t! So I just want to take this moment to appreciate all the friends I’ve made through this blog. You guys are so supportive and the actual best. I can’t tell you how reading all of your comments makes my day. And another thing – I also wanted to say thank you for being so patient with me these past few months. By now you all know that I’ve had a lot on my plate and I’ve been struggling with balancing everything. I’m trying to do better and hope that this year will see Reading By Starlight grow to new heights. You know what they say – third time lucky!

Imagine that you are an intrepid literary adventurer- braving the harsh bookish wilderness, traversing jungles of pages and slashing through vines of words. Where in the vast world of books would you go?

☆ Write about one place mentioned in a book you wish you could visit and why
☆ List 3-5 things that you would do there
☆ Mention which souvenirs, if any, you would bring back with you
☆ Then tag some more literary explorers and please link back to the creator (Umairah @ Sereadipity) so I can see all of your adventures!

Because I know that probably everyone man and his dog will choose Hogwarts I’m going with the Forest Territories commonly known by their Twoleg name White Hart Woods. The Forest plays home to the four Clans of warrior cats in Erin Hunter’s Warriors Saga. In the north of the territory, lies a sprawling, windswept moorland. In the south, the gorge and raging river give way to dense foliage and woodlands. And, at the heart of a sandy ravine, hidden by a thicket of brambles and a tunnel of gorse lies the Thunderclan camp from which the wild clan-cats live, governed by their warrior code.

Now, for those of you who have no flipping clue as to what the actual heck the Warriors are prepare to be enlightened…

Warriors is a series that along with Harry Potter and Twilight ignited my initial love of reading. The original series, consisting of six books and now dubbed The Prophecies Begin is a feline fantasy series – think Watership Down but with cats. Okay, yes Warriors is marketed towards middle grade but trust me, the themes and plot lines explored read more like YA. I mean we are essentially reading about clans of feral cats who prowl the forest. There’s plenty of action, violence and bloodshed as these clans literally fight to survive. 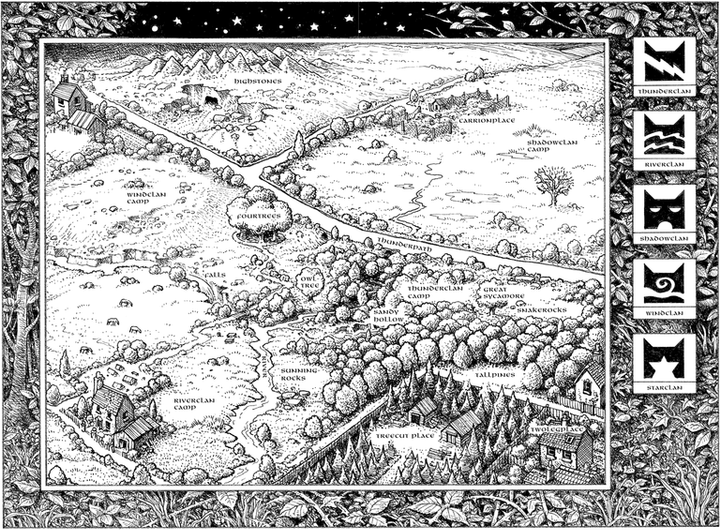 Things I would do:

☆ Join the warriors on a dawn patrol. The warrior code decrees that Clan boundaries must be patrolled daily. During the dawn and dusk patrols, boundaries are checked, scents are marked and any trespassers are challenged, be they outsiders or from rival Clans.
☆ Team up with my fellow denmates on a hunting patrol. I mean – who wouldn’t want to stalk their prey through the undergrowth and practice hunting techniques?
☆ Attend the Gathering at Fourtrees. Considered an honor to attend, once a month, during the full moon, cats from all Clans gather at the sacred Fourtrees under a strict truce to gossip and share current affairs.
☆ Make the long journey to the sacred mountains know as Highstones and share tongues with Starclan at the Moonstone. [Basically where Clan Leaders and Medicine Cats go to communicate with their warrior ancestors]. This is also where Leaders go to receive their nine lives.
☆ It is known that the elders of Windclan claim that in their youth they were able to jump clear across the gorge. If I had nine lives, I’d love to see if there was any stock in those boasts and leap across it myself.

Hmmm… What to take with me from my adventure in the heart of the Clans? I guess I would take my newfound skills. You know – border tactics, hunting techniques, not to mention the quiet dignity and honor from living by the warrior code. But, it would be pretty dang cool to take a piece of the Moonstone with me…

What is your dream bookish adventure?

6 thoughts on “The Bookish Adventure Tag”