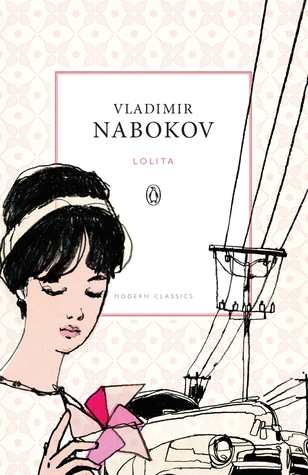 Humbert; scholar, aesthete and romantic has fallen completely and utterly in love with Lolita Haze, his landlady’s gum-snapping, silky skinned twelve-year-old daughter. Reluctantly agreeing to marry Mrs Haze just to be close to Lolita, Humbert suffers greatly in the pursuit of romance; but when Lo herself starts looking for attention elsewhere, he will carry her off on a desperate cross-country misadventure, all in the name of Love.

Vladimir Nobokov’s Lolita is a dark and daring story of obsessive love and transgression. Humbert Humbert’s lust for his pubescent step-daughter, Lolita, shocked readers when it was first published in the 1950s; yet the novel was also celebrated for it’s beautifully lyrical writing. Over fifty years after its first publication, Lolita remains a powerful tale of perversion and love gone wrong.

“Lolita, light of my life, fire of my loins. My sin, my soul. Lo-lee-ta,” and so begins, with perhaps one of literature’s most iconic first lines, Vladimir Nabokov’s complex and multi-layered masterpiece; Lolita.

Lolita isn’t just another modern classic one might be compelled to read in English – it’s a work of art. Highly disturbing, Lolita pushed literary boundaries over half a century ago and still strikes controversy and opinion to this day. But that’s to be expected – what with Lolita’s reputation. Lolita has become known for erotic, pornographic subject matter and a perverted, unreliable narrator. The title alone is enough to stir provocative imagery of a lolly-pop wielding, gum-smacking siren. And, that’s exactly how the book has been marketed in the past; lolly-pops, heart-shaped sunglasses, lipsticks, lips and even alluring young girls, splayed out in provocative positions. All these elements combined have worked to push the false impression that Lolita is raunchy.

Humbert Humbert takes on the role of both protagonist and antagonist and is a prime example of an unreliable narrator. Humbert’s deception makes the reader question Dolores Haze and her innocence. In Humbert’s mind, Lolita is a “nymphet” who seduces and bewitches a wounded man. Humbert sways the reader into sympathy by dehumanizing Lolita, painting her as the temptress and we in turn  fall under his spell. As their three act story progresses, Humbert blames Lolita for their sexual encounters and his suffering before realizing that Lolita was an innocent and he the monster who stole her childhood.

With Humbert as our narrator, the reader must sift a distorted reality to find just who the real Dolores Haze is. Is she the prowling nymphet that Humbert characterizes or is she a helpless child with nowhere else to go? Despite what both Humbert and the novel’s reputation might lead us to believe, Lolita is not the perpetrator but the victim. She is manipulated and abused right under our noses and yet her suffering is suppressed and disguised, veiled by Humbert’s prose. Having Humbert as the narrator doesn’t allow for the orphaned, abused child to be seen. Instead Nobokov shows us glimpses. The real Dolores Haze changes the entire narrative. It’s the little moments – when we witness her falling asleep sobbing into her pillow or when she bargains for pocket money. These are the glimpses that convey how hopeless and hurt she feels.

Lolita is a mature novel that is not for the faint of heart. If you crack open Lolita expecting to find sexual elements you will be left disappointed. As we’ve established, you will not find erotic language but poetic, romantic prose. While rape and sex is implied throughout, the act itself is never explicitly described. Younger readers might even see Humbert’s character as not the vile man he is but the romantic hero he poses as. This is what makes Lolita such a complex, difficult book to read. The more Humbert lulls you into a false sense of security, the more disturbed the reading experience becomes as you grapple with what’s right and what’s wrong.  This story is the jail cell confession of a pedophile and as such it is an emotional experience; you will pity Humbert, you will be disgusted by him and you will cry as you witness Lolita’s lost youth.

That being said, Lolita is perhaps the most powerful book I have ever had the pleasure of reading. If you want to be a writer, if you want to study English Lolita is a must read. Lolita provided the grease to get the wheels in my head turning again. It’s dark, it’s twisted, it’s unnervingly beautiful. Highly recommend.