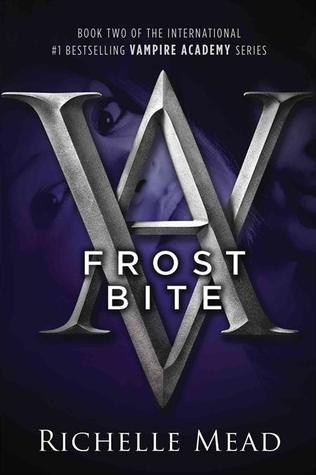 It’s winter break at St. Vladimir’s, but Rose is feeling anything but festive. A massive Strigoi attack has put the school on high alert, and now the Academy’s crawling with Guardians—including Rose’s hard-hitting mother, Janine Hathaway. And if hand-to-hand combat with her mom wasn’t bad enough, Rose’s tutor Dimitri has his eye on someone else, her friend Mason’s got a huge crush on her, and Rose keeps getting stuck in Lissa’s head while she’s making out with her boyfriend, Christian! The Strigoi are closing in, and the Academy’s not taking any risks… This year, St. Vlad’s annual holiday ski trip is mandatory.

But the glittering winter landscape and the posh Idaho resort only create the illusion of safety. When three friends run away in an offensive move against the deadly Strigoi, Rose must join forces with Christian to rescue them. But heroism rarely comes without a price..

This year I’ve come back to Vampire Academy. I figured it was about dang time that I rolled up my sleeves and finished reading the series. And while I’m enjoying revisiting these characters, I have to report that I’ve been somewhat disillusioned with Richelle Mead’s writing style.

Don’t get me wrong – Frostbite, and Vampire Academy as a whole, is deliciously addictive. It’s got everything a good paranormal should; you’ve got some seriously badass women with equally badass [not to mention swoon-worthy] guys. Then there’s the angst riddled plot that’s practically bursting with steamy scenes, political intrigue and plenty of punch-first-ask-questions-later action. The one flaw I took away was that I was slightly less invested in the prose. I just felt a little juvenile? That being said, I can only blame myself for not reading this series in high school.

Frostbite picks up where Vampire Academy leaves off – from the very first page we are plunged back into the familiar halls of St. Vladimir’s Academy. And while we get a brief interlude of attending classes and flirtatious training sessions with a certain smoldering instructor, Richelle Mead doesn’t let us get too comfortable. Right of the bat [stake?] trouble is stirring and we’ve barely found our footing when we’re hit with a violent strigoi attack. With St. Vladimir’s no longer safe, the students are whisked away to a wintry resort and let me tell you, the suspense only intensifies.

Before I get into the characters and whatnot, let’s talk about the expansion to Richelle’s world. What I loved most about Frostbite was it’s glamorous wintry setting. I was 100% on board with the idea of Frostbite being set at at starlit Idaho ski lodge. The resort setting paves the way for ski completions and snow ball fights but also allows access to the world of vampire politics. And while I loved the political intrigue, I have to admit that I was here mainly for the snow caped mountains and chalet vibes. What can I say? I’m a sucker for winter wonderlands – living in Australia will do that to you.

Then we have classic Rose; she’s still kicking major ass and spurting snarky lines but now get to see her developing. Rose really begins to come into her own. She’s maturing and as a novice, she’s wiser and stronger. Okay, Rose might be impulsive and borderline insubordinate but we see her work hard as a guardian and strive to convince Dimitri she’s no child. We also get the see both Rose and Dimitri struggle with their emotions. Given the nature of their student/mentor relationship they can’t hope to act on their undeniable connection. This opens the door to the green eyed monster and new potential romances. As a result, Rose struggles with emotional conflict between her duty to Lissa and her love for Dimitri. Hello sexual tension!

But Rose has bigger problems than a man that can never be hers. Enter Janine Hathaway – Rose’s elusive and absent mother. Janine is another great source of emotional conflict, as Rose comes face to face with the woman who abandoned her to pursue a career. Their relationship is one of the more compelling plot threads. I mean, it isn’t ideal but the tension and their strained dynamic was so much fun to read.

Then we have the men of Frostbite. Man does Richelle Mead have a knack for writing delicious specimens! #stickaforkinme. All I’m going to say is that if you think Dimitri can induce a heart attack [which he is definitely guilty] than you’d better watch out for Adrian Ivashkov. Adrian will pretty much have you at hello. let’s just say that Adrian is a complex, slightly cocky character who will play an increasingly important role in later installments.

My rating might have dropped but Frostbite is still a thoroughly addictive book. You’ll be snickering at the banter, drooling over the sexy guys and sitting smack bang on the edge of your seat. Even if I’m outgrowing Richelle’s simplistic prose, Frostbite is the perfect guilty pleasure. When you need something to breeze through, a cure for a slump or even just a good romance to angst over I’d highly recommend Frostbite. It’s not award winning literature but it’s steamy and a lot of fun.