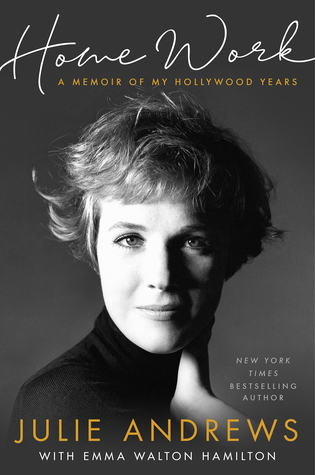 Home Work is the second installment of Julie Andrew’s memoirs, beginning with her arrival in Hollywood to make her screen debut in Walt Disney’s Mary Poppins, followed closely by The Sound of Music. The result is an astonishing rise to fame as those now classic films brought Julie almost overnight success. It was the beginning of a career that would make her an icon to millions all over the world.

With her trademark charm and candour, Julie reveals behind-the-scenes details and reflections on her impressive body of work – from the incredible highs to the challenging lows. Not only does she share her professional experiences and collaborations with giants of cinema and television; she also unveils her persona; story of adjusting to a new and often daunting world, dealing with unimaginable public scrutiny, being a new mother, moving on from her first  marriage, embracing two stepchildren, and falling in love with the brilliant and mercurial Blake Edwards.

In her first memoir, Home Julie recounted her difficult childhood and her emergence as an acclaimed singer an performer on the stage. In Home Work, she takes us on a rare and intimate journey into the next chapter of her remarkable life that is funny, heart-rending and inspiring.

At the risk of sounding cliched, I honestly feel like I grew up with Julie Andrews. The Sound of Music, perhaps Julie’s most iconic role, second only to Mary Poppins, was my mum’s favorite movie and it was a staple in our household. I still remember my mum lulling me to sleep with her rendition of My Favourite Things.

Considering just how much Julie Andrews shaped my childhood and my interest in Hollywood it was a given that her memoir would be right up my alley.

Home Work is the sort of novel you can’t help but draw out. It feels warm and wholesome, even when dealing with some pretty heavy subject matter such as depression and substance abuse. Inspired and enlightening, I cannot recommend it enough for broadening one’s literary horizons for Nonfiction November.

Julie Andrews is the epitome of a Hollywood icon. The personification of elegance, grace and class, I never realized just how hard she had to work to be a dedicated mother, a loving and supportive wife while forging a career as a working woman in a man’s world. In her memoir, Andrews is open and honest, writing with the charm and dignity only she can muster. Every facet is bared as she details an incredible life both on and off the camera from her start on Mary Poppins up until her most versatile performance in Victor/Victoria.

In terms of Julie Andrews’s memoirs, Home Work is a follow-up to Home which detailed her earlier years. That being said, you don’t need to have read Home to fully appreciate this installment. Julie Andrews even does the hard yards for us; offering readers some well-rounded yet brief context in her introduction.

Home Work opens with Andrews’s arrival in Los Angeles. From page one we are thrust, along with Andrews herself, into the bright lights of the Walt Disney Studios in Burbank – the birthplace of the animated film. As with any Julie Andrews fan [or Disney fan for that matter] this was the segment I was most anxious for. Was the Burbank Studio lot as magical as it seemed? Was Walt Disney really larger than life? Was my childhood about to be burned to the ground???

The answer, I am relieved to say, is no. Well – to my child being burned to the ground that is!

Andrews relays the magic and whimsy of the Walt Disney Studios, and her time with Dick Van Dyke on Mary Poppins with a glowing fondness and a touch of nostalgia. It was an experience and character that Andrews was truly proud of and it bleeds into her writing. At this point, Andrews was fresh off the stages of Broadway. She was young, with a new husband and daughter [co-author Emma Walton Hamilton] in tow, and had very little experience working in front of a camera. Andrews, under the guide of Walt Disney himself who she described as “that of a kindly uncle – twinklyeyed, chivalrous and genuinely proud of all he had created”, was learning everything on her feet, coping with anxieties and self-doubt along with the Californian heat.

It’s in a similar fashion that Andrews recounts The Sound of Music. Funnily enough, Andrews admits that when she’d seen The Sound of Music on Broadway she hadn’t been “wildly impressed”. In fact, Carol Burnett along with Andrews had even done a skit called the ‘Pratt Family Singers’ during a television special. While originally doubtful about accepting the role on the heels on Mary Poppins, it is evident that Andrews loved her work on The Sound of Music. From the origins of her iconic blonde bob to hilarious antics and mishaps filming love scenes with the magnetic Christopher Plummer, Andrews paints a vivid picture of filming the sweeping epic in great detail.

It’s no surprise that Home Work opens with Mary Poppins and The Sound of Music. After all, it was these films that launched her film career and made Andrews a household name. That doesn’t mean that the rest of her memoir falls short. Not in the least. What follows a rosy-hued opening is a mature but proud reflection of her catalogue of films set against the backdrop of her complex relationship with husband Blake Edwards.

Andrews’s anecdotes from her home life are just as enthralling as her portraits of Walt Disney, Dick Van Dyke [“dazzlingly inventive, always in a sunny mood”] and Christopher Plummer [“an esteemed classical actor” but “very gentle and constructive too”]. Then there’s the behind-the-scene tidbits scattered throughout. One in particular that stood out [probably because, like The Sound of Music it’s one of my favorite movies] was the fact that Andrews was offered the role of Truly Scrumptious in Chitty Chitty Bang Bang but declined due to a fear of recycling her Mary Poppins image.

Basically, and if you’re still with me by this stage, Julie Andrews is everything you’d wish her to be. She’s warm, she oozes class and she writes with a dignified modesty which made reading Home Work a truly nostalgic experience. If I haven’t already raved enough, Home Work is required reading for anyone inspired by Julie Andrews or by the inner workings of old Hollywood.

4 thoughts on “Review: Home Work a Memoir of my Hollywood Years by Julie Andrews”