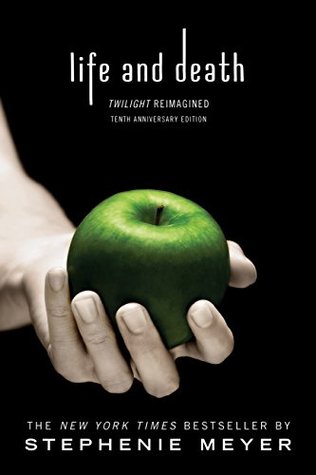 For the first time in a stand-alone edition comes Stephenie Meyer’s Life and Death, a compelling reimagining of the iconic love story that will surprise and enthrall readers.
There are two sides to every story…. You know Bella and Edward, now get to know Beau and Edythe.
When Beaufort Swan moves to the gloomy town of Forks and meets the mysterious, alluring Edythe Cullen, his life takes a thrilling and terrifying turn. With her porcelain skin, golden eyes, mesmerizing voice, and supernatural gifts, Edythe is both irresistible and enigmatic.
What Beau doesn’t realize is the closer he gets to her, the more he is putting himself and those around him at risk. And, it might be too late to turn back….
With a foreword and afterword by Stephenie Meyer, this compelling reimagining of the iconic love story is a must-read for Twilight fans everywhere.

I had no intention of writing a full review for Life and Death. I mean, it’s a gender-bent reimagining of Twilight – I think that pretty much speaks for itself.

But the thing is, I have a lot of mixed feelings about this one and those said mixed feelings have been churning away inside my mind. So, here we are. Surprise!

As I said, Life and Death is basically Twilight only reimagined for it’s tenth anniversary. This time, it’s Beaufort Swan who moves to the gloomy little town of Forks, Washington and meets the mysterious Edythe Cullen [who may or may not be harboring a dangerous secret].

It look me a lot longer than usual to fully lose myself in Life and Death. This was actually the fourth time I’d attempted to read it – I’d never made it past the first three chapters. I think I’ve always been too close to Bella and Edward. It’s difficult to separate them from Beau and Edythe. It’s also impossible not to draw comparisons. Especially because Beau’s inner monologue is practically identical to Bella’s. Well, at least during the first few chapters.

But, in preparation for Midnight Sun [which I am VERY optimistic about], I was determined to put Life and Death to rest, finally knocking it off my TBR. And, in the end, I actually managed to tumble down the rabbit hole with Beau and Edythe. I think once you start to see them as individuals, Life and Death becomes a lot more interesting.

That’s not to say that Life and Death is perfect and it’s certainly not better than Twilight.

Let’s talk about Beaufort Swan. I think Beau’s the main reason I had trouble with the beginning. I’m not going to lie – I found it hard to get on-board with his character. Beau just came across as a Sad Boi™. But, as the story progressed I noticed that, unlike Bella, Beau’s a little more self-aware. He didn’t tolerate any crap from the cafeteria crowd, especially from Jeremy/Jessica. Actually, Jeremy/Jessica was a lot less civil in Life and Death and Logan/Lauren was a straight-up savage but we always hated her. I also appreciated that Beau was more aware of his obsessive infatuation with Edythe.

But despite Life and Death’s rocky start, I can pinpoint the exact moment I finally snapped into Beau and Edythe’s story. It was the “invitations” chapter – when the entire student body attempts to ask poor, unsuspecting Beau to the school dance. This was the moment Life and Death really found its footing. The dialogue and plot started to shift away from Twilight and I even laughed at some of Stephenie’s more witter lines. Actually, I think Beau and Edythe’s interactions flowed better than Bella and Edward’s did. Let it be known that bantering about weak vasovagal systems is freaking iconic.

That being said, there were parts of Life and Death that felt a little… on the nose. I mean, it’s blatantly obvious that Stephenie Meyer worked really hard to sell Beau’s story as pro-feminist. Twilight had always been subtle in the way it examined feminism and gender roles. Twilight showed us that Bella was this intelligent and mature young woman who refused to confirm to society’s expectations. Life and Death, on the other hand, was constantly trying to tell me.

BUT [hello positives!], by smoothing over Twilight’s anti-feminist claims, Life and Death prompted some very important conversations. Let’s be real – most of these conversations should have happened in Twilight. You know what they say, hindsight is 20/20.

Anyway, despite some obvious flaws, by the time Edythe was rescuing Beau from being shot in Port Angeles, I was fully invested and enjoying the shifting character dynamics. Life and Death was shaping up to be a four star read.

And then I got to “the hunt”. Basically it’s all downhill from there.

As we reach the climax, we’re almost bombarded with exposition and an ungodly amount of info dumping. I get it – Stephenie Meyer had the seemingly impossible task of summing up an entire saga’s worth of world building. But not only did she succeed in dragging out the plot, she also dramatically slowed down the action. Unfortunately, the info dumping begins to make sense as you creep closer to the ending. Let’s just say that I had a hunch and I wasn’t wrong…

There was only one way Beau and Edythe’s story could end – I don’t hate the choice Stephenie made. I just can’t help feeling the execution was seriously lacking. Like, could we get little more work please? Maybe another edit??? There was WAY too much exposition. Also… I’m still not sure how I feel about that twist. The final chapter felt so melancholy, almost deflated? I had to really push myself to skim those last fifty pages.

So was Life and Death necessary? Definitely not. Bella’s story had a happier conclusion – despite everything, she lived the best possible version of this story. But that’s not to say it wasn’t interesting to see what might have been. Ten years later, Life and Death gives readers the alternate timeline to Twilight, this humongous “what if?”. And while I’m not sure I’d ever re-read Life and Death, I did have a lot of fun with Beau and Edythe’s dynamic. I’d recommend Life and Death if you want to pass some time during self isolation and ponder the multiverse.