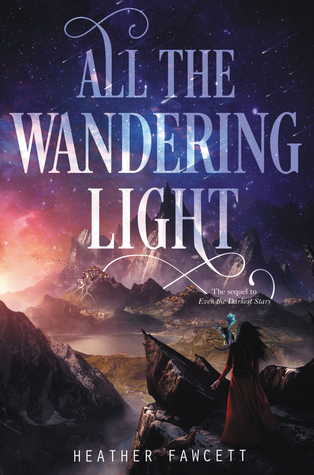 After the terrifying events on Mount Raksha, the witches have returned, and River has betrayed Kamzin to regain his dark powers. The witches’ next step: march on the Three Cities and take over the Empire—led by River’s brother, Esha.

If Kamzin is to save Azmiri and prevent the fall of the Empire, she must find a star that fell in the Ash Mountains to the north. Fallen stars have immense power, and if Kamzin and Lusha can find the star, they can use its magic to protect the Empire. To get there, Kamzin has allied with Azar-at, the dangerous and deceptive fire demon, who can grant her great power—in exchange for pieces of her soul. But River wants the star too, and as their paths collide in dangerous and unexpected ways, Kamzin must wrestle with both her guilt and her conflicted feelings for the person who betrayed her.

Facing dark magic, a perilous journey, and a standoff against the witches, can Kamzin, Lusha, and Tem find the star and save their Empire?

Even the Darkest Stars introduced us to Kamzin, a daring, brave and complex protagonist on a grueling trek to reach the summit of Mount Raksha. But the climb didn’t exactly go as planned and now, thanks to Kamzin, the mountainous empire is on the brink of collapse. Weary, exhausted and reeling from River’s betrayal, the crew are thrust into one last adventure to save the empire.

Wow. Talk about a breathtaking conclusion to a seriously atmospheric duology.

All the Wandering Light was fantastic. Heather Fawcett took everything we knew about this world before turning it on its head, hurtling us into the unknown. She elevated the stakes, pushed her narrative into dangerous new territory while simultaneously expanding on her sprawling empire.

THIS is how you write a gripping duology.

[Also, can we please just talk about how Elsa = Lusha, Kamzin = Anna, Tem = Kristof and their yak is basically Sven???].

The first thing I have to rave about is Heather Fawcett’s world building because I am just in love with this snow-capped, Himalayan-inspired world. I mean, why aren’t more books set in the mountains? Someone make this happen. Anyway, Even the Darkest Stars set the scene but All the Wandering Light took us to the Three Cities and beyond. Not only did this expansion heighten the stakes but it made for some interesting new dynamics. Royal politics came into play as Kamzin, Lusha and Tem arrive at Court. There’s plenty of intrigue and court drama as well as some good old fashioned mountaineering.

And speaking of stakes, All the Wandering Light was TENSE. So much was riding on Kamzin’s desperate quest and that weight shadowed every choice she made.

There was also a lot going on in terms of plot. While Even the Darkest Stars was mostly adventure-driven and simplistic in nature, All the Wandering Light was rich and complex. Switching things up, Heather Fawcett featured dual point-of-view which offered an intimate look into the inner workings and politics of the witch kingdom. All I’m saying is things get murky. Not everything’s as black and white as it seems…

[There’s even an enchanted forest crawling with witches].

But at its heart, this is a story about complex sister relationships [talk about some serious Frozen vibes]. Lusha was mostly absent from Even the Darkest Stars. Setting off on their own rival expeditions, the sisters were constantly at odds and often played against the other. Both Lusha and Kamzin have very distinct, strong personalities so it was interesting to watch them working together during All the Wandering Light. Tensions were high and each sister struggled to compromise as they fought for dominance. Especially because they didn’t always see eye-to-eye.

And don’t even get me started on our girl, Kamzin because she just might be one of my favorite fantasy heroines. Ever. Kamzin had such a beautiful character arch. Introduced as rash and impulsive, Kamzin grappled with a lot of pressure during the course of the duology. In All the Wandering Light, Kamzin had to deal with the fallout from River’s betrayal as well as her guilt and mixed feelings for him. Heather Fawcett really allowed Kamzin to grieve and the redemption arch was EVERYTHING.

Then we have her relationship with Ragtooth [honestly the MVP of this duology] and fire-demon Azat-at. Let’s just say that Kamzin was forced to make some very hard decisions…

If I had one complaint, it was that I wished Heather Fawcett had revealed a little more about the role of familiars and the lore behind them. There was a lot of foreshadowing and hints but it was mostly left to the reader to decide. I NEED TO KNOW MORE ABOUT RAGTOOTH! [I’m thinking spin-off???]

Basically, with All the Wandering Light, Heather Fawcett has cemented herself as one of my new favorite fantasy authors. This duology was full of adventure, betrayal and high stakes survival, making for a truly immersive reading experience. If you’re interested in Tibetan culture and mountaineering, if you love sweeping, snow-laden worlds, then you HAVE to read this duology. Honestly, cannot recommend it enough.

7 thoughts on “Review: All the Wandering Light by Heather Fawcett”